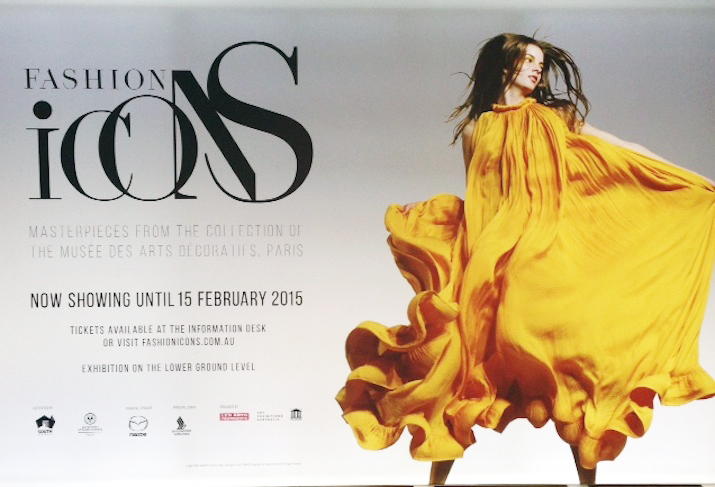 I just had to write this post after visiting the Fashion Icons Exhibition exclusive to the Art Gallery of South Australia.

Approximately one hundred haute couture garments were on display. They were on loan from The Musee Des Arts Decoratifs in Paris. The exhibition showcased designs from some of France’s leading fashion designers.

What does Haute Couture mean?

Couture means dressmaking in French and Haute means high. Before this exhibition I didn’t really understand what it meant. To have a collection known as Haute Couture one needs to pass the following criteria:

I booked a tour guide that took me through the exhibition. Our tour guide had a preference for Dior, which didn’t bother me. I enjoyed her thorough and detailed explanation of the Dior pieces. I also thought it was cute when she stated that she’s never been a Chanel type of girl.

FACT: Did you know that the fashion industry is worth 1 Trillion Dollars per year!!!! Yes, ONE TRILLION DOLLARS.

Imagine being a select few in the world to afford a Haute Couture gown. Imagine asking Karl Largerfield to design something exclusive and special just for you. The tour guide told me that Jackie Kennedy called Valentino on several occasions to design something for her. Imagine that!

The Adelaide by Dior

The exhibition begins with couture of the late 1940’s and 1950’s. This elegant and voluminous Dior gown was perfect as the opening masterpiece.  This gown drew on historical periods for inspiration and had apparently been designed for a special occasion. Where else would you wear something as over the top as this? It was made from 38 meters of tulle and finished off with a subtle gold waist detail. It was on display with a lovely jacket made from duchesse satin.

It’s interesting to think that Dior used this much fabric considering there was a ration imposed during this time allowing only 3 metres of fabric. The rationing was during the war years; Dior is post war 1947-8. I’m pretty sure he would have made some people very angry!

The Bar Suit by Dior

The Bar Suit was created to make women feel and look glamorous. This suit was suitable for late evening cocktail events. Dior designed this piece to accentuate the figure of what he felt a women should look like. Hence, the wide shoulders, slim waistline and padded peplum that brings out the hips. This outfit represented elegance and the end of the World War II.

FACT: Did you know that Dior was 42 years when he displayed his first collection?

The Mexique by Dior

This dress was so elegant. I can picture how sophisticated and classy the lady who wore this dress felt. It’s brilliant the way Dior takes a simple crescent moon motif and uses it for this dress. It draws your attention all the way up the dress where the motif gets smaller. The dress is then finished with a luxurious, dark coloured brown velvet bow.  It’s amazing how Dior takes a fabric like tulle and combines it with a velvet bow. Back then, who would have thought to mix tulle and velvet together. I also thought it was ahead of its time to have used an ombre affect to colour the dress.

After Dior I saw the Balenciaga dress which was unlike anything I had ever seen before. It was my favourite. The richness and flavour of the cherry red was hypnotising. Any women wearing this would turn heads. Balenciaga believed that you need to know the basics of how fabrics would fall. Dior referred him as a master.

He understood how silk taffeta works. You don’t see clothes now a days made with this material.

Paco Rabanne (a designer from the 70’s) said fabric is so 19th century and never made a gown with fabric. He used every other material but fabric! This dress was made from press metal linked together. It would have been kind of cool to wear back in the 60’s to a disco! This space-age shift dress was famously worn by Brigitte Bardot.

Last but not least I saw the most expensive gown in the exhibition. This dress was designed by Karl Largerfield for Chanel in 1996. It’s made from pure gold. This would have been heavy to wear and took an astonishing twelve hundred hours to make.  It was a stunning gown and did stand out from the rest. It was hard to believe the gown was made from real gold.

I want to share this interesting video with you. It gives you an incredible insight into what it means to be one of the few around the world who buy and wear Haute Couture.

Click below to read some of my other Fashion inspired blog posts:

–My Fashion Styling Session with Chelsea