I couldn’t wait to visit the Bulgari exhibition at the NGV in Melbourne.

Bulgari evokes glamour, luxury and sophistication. Their exquisite and timeless designs are linked with some of the world’s most prestigious ladies including Elizabeth Taylor, Grace Kelly and Sophia Loren.

NGV’s exhibition titled Italian Jewels: Bulgari Style brings together spectacular treasures from Bulgari’s Heritage Collection. It’s incredible to imagine at some point in time these jewels were worn casually, as a statement piece in an old Hollywood film or on a red carpet event.

The exhibition includes necklaces with modular segments that convert into a shorter style allowing the wearer to use the other piece like a bracelet – a very innovative design aspect for high-end jewellery at that time.

It was also during this time that Bulgari introduced one of their signature designs, the Serpenti. The exhibition includes a stunning white enamel yellow gold Serpenti belt once owned by the editor of Vogue Diana Vreeland (as seen below). She was photographed on many occasions wearing this piece as a belt as well as a necklace, draping the Serpenti belt around her neck. 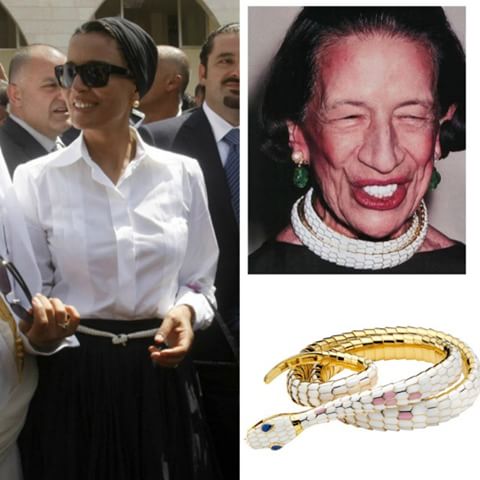 Yellow gold, gemstone and diamond encrusted Serpenti watch bracelets were also on show. The delicate watch face hides inside the mouth of the serpent forcing the wearer to physically open the precious serpent head to reveal the time – what a classy way to look at the time. These watches also feature a highly polished inside to make the watch as comfortable as possible for the wearer. 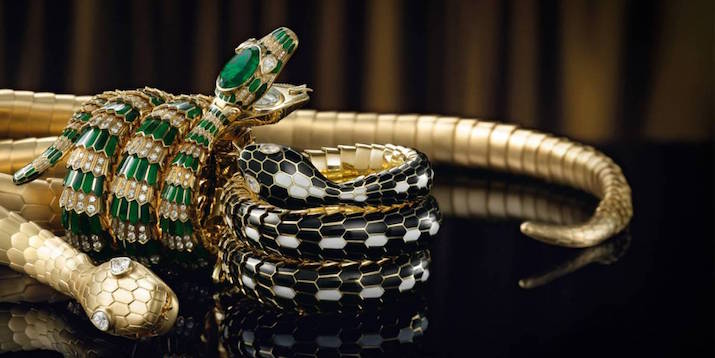 Bulgari created a collection of diamond crusted floral brooches in which the flower head is mounted on coil springs. Designed to allow the floral motif to move with the wearer. The brooches vibrate when I walked passed their display case. The sparkle was out of this world! Can you imagine how much light these diamonds would have reflected when worn by a famous Hollywood actress at the time walking out into the flashing lights of the paparazzi cameras?

Bulgari’s unique style started to flourish. Pieces were crafted using gemstones based on their colours rather than their value. Bulgari also began to introduce the cabochon cut, a cut usually reserved for semi-precious stones; it was used on precious stones. For example on display were some pieces that featured a centre stone (such as an emerald) made using the cabochon cut.

The cabochon cut leaves the stone with a rounded very smooth finish that allows the light to shine through instead of reflecting it.

Below are two bib style necklaces on show illustrating the cabochon cut. You can see the larger stones appear to be smooth and round. 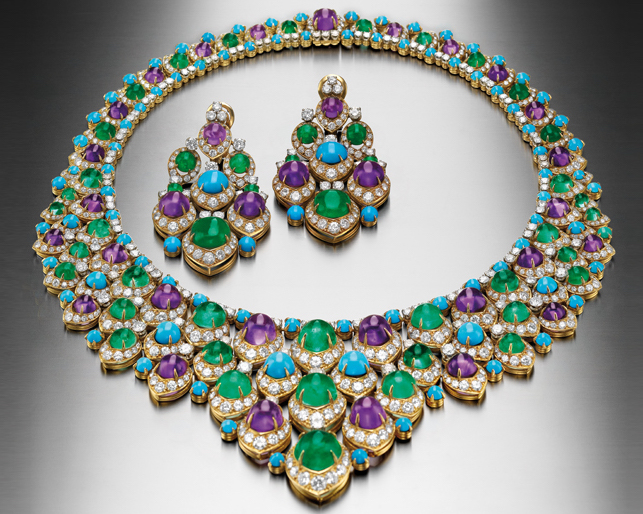 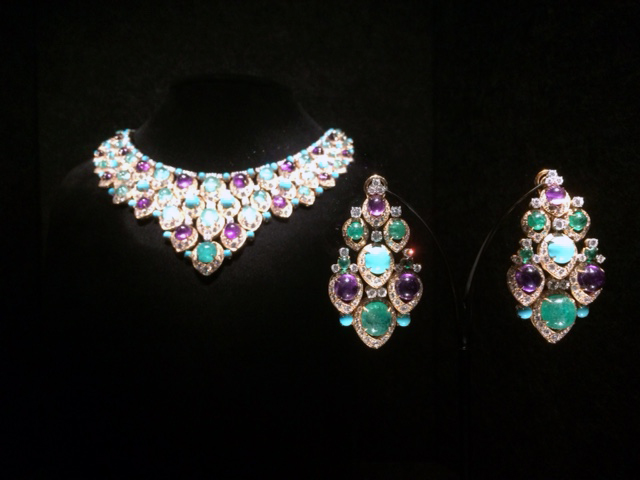 Bulgari Bib necklace 1965 and earrings made in gold, emerald, amethyst, turquoise and diamond. 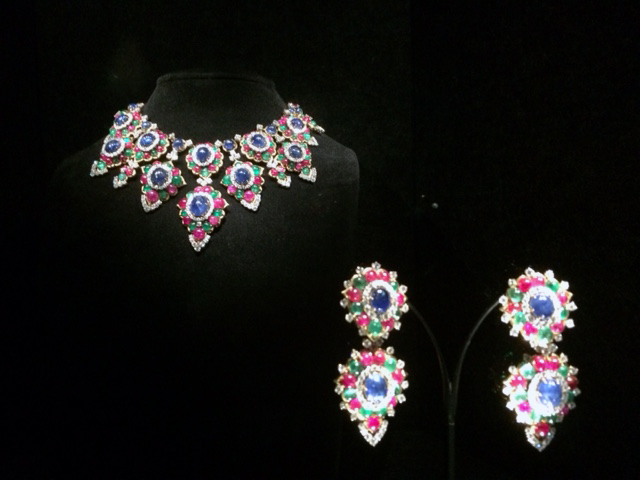 Bulgari Necklace 1967 and matching earrings made with gold, emerald, ruby, sapphire and diamond.

Bulgari appears to be more playful and experimental with their designs during this period. For example, long necklaces featuring large comical style motifs pendants are suspended from thick decorative chains known as Sautoirs. 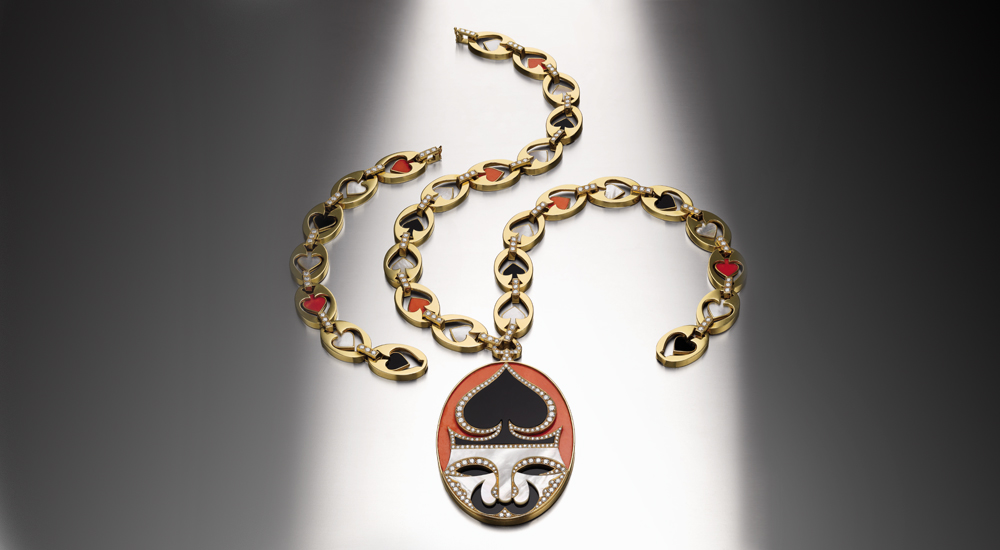 These necklaces are extra large weighing over 1kg each. These necklaces were designed to be worn with long maxi dresses and are modular meaning the chain can be broken apart and worn as a shorter style chain, with or without the pendant and the remaining piece used for a bracelet. 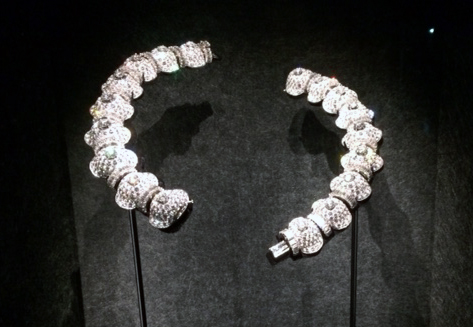 It was also during this period where Bulgari started to offer accessories. One popular accessory included the Melone bag. These small bags were crafted in precious metals. Some of the Melone bags on display were adorned with gemstones and diamonds on the outside of the case. Each Melone bag featured a silk tassel. Apparently, there was a long waiting list for these bags back in the day. The bag is held by the luxurious silk tassel. 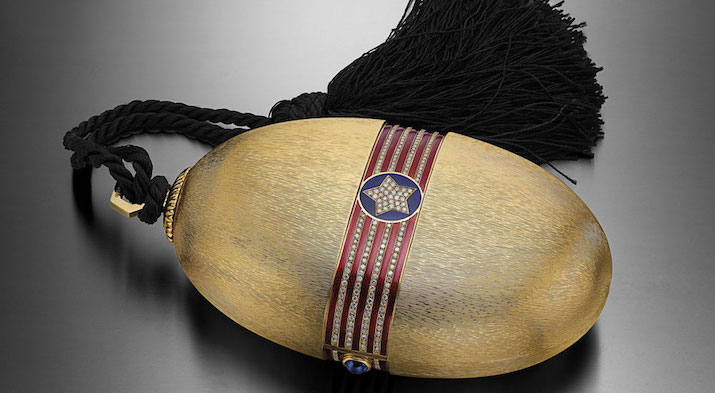 Bulgari continued offering statement pieces in colour. However, it was during this period that designs started combining precious gemstones with even more varieties of semi-precious stone such as tiger-eye, citrine and amethyst.

They also experimented with metals such as mixing yellow gold with stainless steel as well platinum.

The jewellery from the 80’s on display were robust, striking and chunky and I could see how these designs would have matched to power suits of that era with their hard tailoring and pronounced shoulder pads!

It was a great exhibition, well worth the visit. My tip would be to make sure to go on a guided tour like I did.

Below are some other posts I’ve written about fashion exhibitions I’ve visited: