Enjoy a great conversation? I'll personally deliver my favourite new experience to your inbox every 2nd month...join here!
You are here: Home / Work and Money / Jessica Wilson – Founder of Stashd

The Unconvention, organised by The Entourage, is Australia’s largest entrepreneurial event. Attendees at the event included start-ups, tech heads, entrepreneurs, mentors and extraordinary people. All of which came together to hear the advice, stories and setbacks of some of Australia’s leading business people.

I like to think of myself as pretty hardcore, but there’s something about 9 hours of excitement and adrenaline that really takes it out of you. The vibe of 1,000+ like-minded people, crammed into Melbourne’s Convention Centre was magical and definitely a worthwhile experience!

The all-star line up included entrepreneurial geniuses such as Ruwan, Founder of Rewardle, Dan & Kieran from The Impossible Institute and Jack Delosa. One speaker which I was particularly excited to hear from was none other than Jessica Wilson the Founder of the fashion app Stashd. Jessica Wilson the Founder of the fashion app Stashd.

As she stepped on stage I knew she was going to blow us away with her story. Originally from Coffs Harbour, Jessica started her entrepreneurial journey at age 15 recognising an opportunity after her secondary school decided to ban after-formal parties. Using the vast space available on her family’s farm, the smart fashionista created an event/after-formal party of her own. With the success of the first, many followed and it wasn’t long before Jessica was throwing after-formal parties for all the local schools. This simple, yet brilliant idea generated enough revenue to pay for her first year of higher-study.

Not surprisingly Jessica went on to study Event Management in Sydney and as part of this course she was eager to undertake an internship in fashion. In hope of some guidance, she paid a visit to the school’s career advisor who blatantly told her that she would never land an internship in fashion, it was far too competitive and she should really set her expectations for something a little more realistic.

If you’ve paid any attention to what I’ve written so far, you’ve probably come to realise that Jessica doesn’t really take ‘no’ for an answer and sure enough she soon found an internship in fashion. This eventually led Jessica to New York, working in fashion shows back stage with the likes of Akira, Samantha Wills and Bettina Liano.

At age 22 and being an avid online shopper, Jess became increasingly frustrated with the whole online shopping experience. She felt there was a gap in the industry for a simpler and more seamless mobile shopping experience. Now I don’t want to give anything away; but she was right. While still in America, she took the opportunity to pay a visit to Silicon Valley which eventually led to the birth of Stashd, an app that is used in over 85 countries. 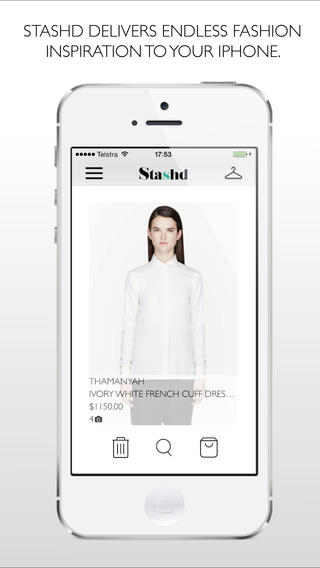 Stashd is a fashion app that allows you to swipe and save your favourite clothes and accessories from the best fashion stores.

Stashd is a fashion app that allows you to swipe and save your favourite clothes and accessories from the best fashion stores around the globe. It pretty much means you don’t have to visit multiple sites to find that perfect outfit!

After all the craziness of The Unconvention settled down, I was lucky enough to get Jess’s attention (thank you Twitter!) and have her share some of her awesomeness with us below:

1) What do you feel was your biggest challenge or setback when trying to launch Stashd?

One of the biggest challenges was walking into an industry with no previous knowledge or contacts. Deciding I wanted to be in tech was difficult, everything from finding talent, to communicating a vision to learning the do’s and don’ts. I felt as if I was speaking English and everybody I was speaking to was Chinese. The fashion and technology spaces are very different, so being able to understand enough about both worlds to bring them together in a seamless way that excites the user and solves a problem was and still is my greatest challenge.

2) How did you celebrate when Stashd received its first download?

I think I might of screamed, closely followed by more work. You can’t stand still for too long in the start up space.

3) Have there been any comments/feedback you’ve received since launching the app which really stood out (positive or negative)?

I’ve had people call me or send us through emails that they had spent the entirety of their lunch break on Stashd as they lost track of time. People love the interface! We have a high focus on customer engagement, so to hear that feedback is great!

Negative wise, part of my strategy included launching with stores such as Net-a-porter which for some people was a little out of their price range.

4) Who do you look up to as a mentor; either someone who has guided you in business or inspired and motivated you?

5) What is a favourite fashion accessory you own at the moment and why?

I’m not sure if you would call it a fashion accessory, but my new Marc by Marc Jacobs gold phone case, I am loving it!

I highly recommend you check out Stashd.